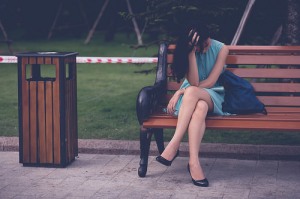 We know there are always exceptions to the rule, but I think this is why women get called crazy and why it seems there’s always that one girl a guy never gets over. My guy friend, Mick, is going through it now. He was dating a girl that was all about him yet he wasn’t ready to commit. As he was growing closer, she was pulling away. She found someone that gave her the attention she never received from him and they broke up. While she’s moved on, he’s trying to get her back. But the pain is already too deep and the scars have already been made. How does this seem to happen over and over again?

It’s in our nature. The hope. The giddiness. We fall and we fall fast. We are so ready and want the “too good to be true” to be, well, true. So we do. We get a little crazy. And sometimes it’s a little much. We’ve waited so long for this and we don’t want to lose it. I think part of it is we are in love with being in love. And sometimes I really wonder if we could love anyone. Anyone that truly loves us that is.

Unfortunately when you mix these two, it appears (on the surface) the woman started liking the guy more and the guy started liking the woman less. So as the men (in reality) are growing closer, the women start pulling back. For women, a man’s cautiousness equates to not being interested. To her, you are inconsistent and she’s lost trust in you. She starts not being herself because in her mind, herself isn’t good enough anymore. Men, I cannot stress this enough- make your intentions known from the beginning and ensure your actions align appropriately. Women crave this. They want stability. They need to feel safe and secure. If not, she starts to become insecure and no woman likes feeling this way. And women, we need to learn to be patient. A guy wouldn’t be talking to you if he weren’t interested. Remember this before you start to freak out. This is the make it or break it stage.

And a lot of the time it’s a break it. Women were healing and starting to get over the guy during the end of the relationship and the men are left without closure. The woman starts to nit pick every little thing to justify her reasoning for wanting to leave and the man thinks she’s gone psycho. This isn’t the woman he fell in love with but he wants her back. So he hangs on. But women rarely go back. Once they get over you, they just don’t see you the same way. There’s too much rejection and insecurity to go back.

It’s all a little sad. To think that a, what could have been great, relationship was lost over simple miscommunication, wrong timing. But part of me has to believe it was never real love. Maybe more attachment. More comfort. Because when we really love someone, we’ll deal with a little crazy and we’d be a little more patient.