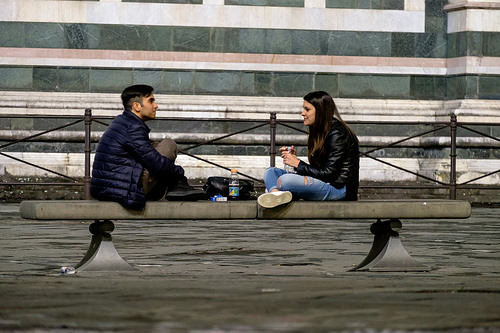 And so begins another controversial topic. I need to choose my words carefully as to not sound like I am purposely trying to be a home wrecker. I believe in being loyal but it can be a very scary thing when we become too loyal to the wrong person. I don’t believe in cheating but I do believe in getting to know someone you like. So let me tell you why I will still talk to your boyfriend:

We settle because we don’t find anything better. Dating is to see whether or not you want to marry that person. I don’t know why we are so afraid to talk to people in relationships or let our partner talk to others. I wish we could all be a little more open and less insecure. Maybe I’m too idealistic. Maybe I believe too much in trust and communication. But. If it’s meant to be, it will be. Whether he ends up with you. Whether he ends up with me. Whether he ends up with someone else. We’re all just trying to maneuver this same life while making the best choices possible. I guess I have faith and hope that someone will understand the prize I am and not want to be in a relationship with anyone but me. If he does, maybe we aren’t right for each other in the first place.

You just can’t. This has happened to me a few times now and it blows my mind. Guys that are in relationships and will break up with their girlfriend if I will date them. The catch? They won’t break up with them if I say I just want to be friends. They want commitment. Commitment I can’t give. Commitment I shouldn’t have to give. And they stay with their girlfriends because of it. Some are now single, some are in new relationships, and others are still with the same girlfriend- perhaps married now.

Okay, maybe I do. I’ve been tempted to settle. The thought that no one better will come along has crossed my mind more than once. So I make excuses and try to make it work. But the peace just isn’t there and something doesn’t feel right. But it’s better than being single. Or is it?

I don’t think it is and that’s why I’m still single. Are we really that afraid to be alone? So many people jumping from one relationship to the next. Securing their next partner before letting go of their current one. You want to think it’s romantic- that they are willing to give up their current girlfriend for you but it’s not. Not when they won’t give them up for themselves. I could never be with any of these guys because I can’t respect someone who doesn’t respect themselves. They deserve more. And their girlfriend deserves better.

What is so hard about deciding what you’re looking for and waiting for it? Why can’t we set our standards high and ensure we are meeting those same standards? Maybe it’s because we lack faith and hope. Faith that God has someone out there that’s perfect for us. Not perfect, but perfect for us. Someone that brings out the best in us and loves us all the same when the worst comes out. Hope that He’ll bring them in our lives at the perfect time. Not when we are needy. Not when we are desperate. But when we are full. Complete in Christ. Because it’s then, and only then, can we see our potential partner as a beautiful complement to our lives instead of fighting for them to complete us when they can’t.

I can’t tell you who to wait for but I have a feeling you already know.

photo credit: You have my heart, at least for the most part via photopin (license)