My last blog post focused on what influenced me during my teen years to remain abstinent but I think we can all agree that it can get somewhat more difficult to keep that same commitment during your 20’s. It’s interesting how expectations and norms seem to change. I think in your teens you get made fun of for being a virgin but at the same time, it’s understandable. When I hit my 20’s especially the later years, the conversation shifts from “have you had sex before?” to just assuming you have. So whenever it gets brought up in conversation that I haven’t, it’s a little awkward. But that’s okay because that’s my whole goal. Okay not to make things awkward lol but to change the stereotypes a little, if not a lot. And that’s why I’ve been so grateful for the invaluable resources I have found along my journey to both strengthen and encourage me. I get messages from people letting me know they are waiting too and it just makes my heart so happy. We don’t have to do things the same way as society- there is another way.

The resources that stick out the most to me are two pastors and their sermon series and two books.

I will more than likely do a four part series on Andy’s messages but you still need to watch/listen to them! I listen to them about every six months. I’m surprised I don’t have them memorized at this point. The four messages include:

What stuck out to me most throughout this series was the bluntness and the reality that many people don’t face. You will not die if you don’t have sex. The way we sabotage our own relationships by listening to the devil’s temptations that make absolute no sense. It’s even comical at times. I think my favorite piece that touched me the most was a story about a young girl he had shared. This girl was raised Christian but she wanted to live in the world a little, experience it- sow her wild oats, so to speak. And she did. She was used and abused, going from one guy to the next to fill her void and in an attempt to find love. One night she was at a party and starting talking to this nice guy. He was successful, good looking, sweet- and it was apparent he was a solid Christian with strong convictions. She was so excited about this guy. She went home to tell her mom and went on and on about this guy, listing all of his good qualities and traits. The mom was excited but she was also a realist and she told her daughter that it was fantastic but that the problem was a guy like that isn’t looking for a girl like you. Wow. In that moment she just broke and realized the way she had been living. She decided to take a year off from dating and really focus on who she was and what she wanted in life. One of my favorite quotes from his series that I am always thinking about and constantly telling people is

Go ahead and read it again- it took me a few times before I really understood the magnitude of it. Anyway, it’s an amazing series and I encourage you to watch it.

I did a two part series on this and you can read it here: Part One: What to look for when you are looking for marriage & Part Two: How do you date

All in all, Ben is a great pastor at Texas A&M and has a great gift for ministering to college students. Even though I’m a tad bit older now;) I still listen to him. I linked up where you can find his podcasts. Unfortunately I don’t think the ones I listened to are available anymore. My notes pretty much cover it though;-)

When God Writes Your Love Story 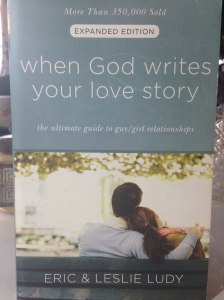 Okay so I must confess something here. I have always hated to read, always. As I have matured (hehe) I have tried to love it. But certain books make me forget how much I hate to read. I actually don’t want to put them down and this was one of those books. It’s about a husband and wife who share candidly about what it’s like to be a Christian waiting for the right one God has for you. I could have sworn that by the end of the book I was BFFs with the authors. The overall theme was about how God is the author of romance and how He desires to pour out that love to you and how when you surrender control to Him, He blesses you in more ways than you could have even imagined. Here’s just one of my many underlined quotes on seeking a spouse from the book:

“…This doesn’t mean you remain passive in the process. But your role is not to frantically search for a spouse and then ask God to bless your selfishly motivated decisions. Rather, your role is to pray, to trust, to build your life around Him, to listen to His still, small voice of guidance… and let Him take care of the rest. If you desire a beautiful God-written love story, your time will be far better spent cultivating your relationship with Christ than searching the Internet or the local coffee shops for good-looking potentials… God gives His best to those who leave the choice to Him.” 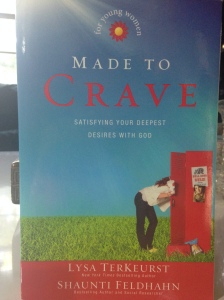 The reason I love this book so much is because it puts things in perspective for me. It really got to the root of our issues and addressed those “cravings.” Once again I underlined sooo much in this book and I laughed at some of the things I write in my books. If you couldn’t tell by now, I generally say exactly how I feel. Proof: 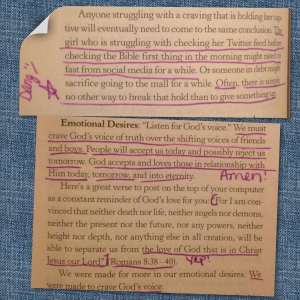 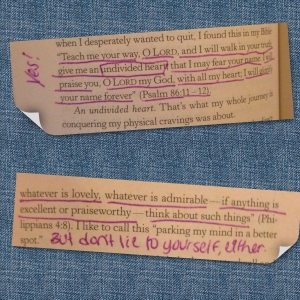 I learned SO MUCH in this book and I honestly think anyone could get so much truth out of it. Here is one of my favorite quotes from this wonderful book:

“Our feelings follow our actions so much, in fact, that our actions become one of the primary tools we have at our disposal as we try to turn our cravings toward God and away from counterfeits. If you really truly want to honor God and change what you are craving, you must first change what you are doing… The cravings we feed will grow bigger and stronger, and have more hold on us. But the cravings we starve will wither, weaken, and eventually die. To the degree we “feed” God’s way of filling our God-shaped hole, we’ll find that way so much more compelling. And to the degree we “starve” all the old, unhealthy ways of filling that hole, we’ll find they are much weaker, and have much less power and temptation over us.”

Whoa. Can we just think about that for a second? That statement is so true. I just pray we all muster up enough courage and strength to say no to what we know is not good for us.