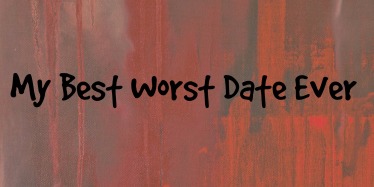 I’m not sure why I’m starting out the new year with this type of post but here goes lol. I have had some pretty interesting dates over my manyyy years of dating- okay okay, I’m not that old people! But they were talking about worst dates on the radio the other day and I was talking to some of my friends on Facebook about our experiences and there are some weird stories out there! Mine was not that bad. Okay, maybe it was. Here it is, in three parts. Yes, three.

The first date:
I still remember talking to a couple of my girlfriends about all of our current guy situations. Yep, it’s true- guys dominate a lot of our conversations. One of my friends had recently went out with this guy and was telling us all about her “fun” experience. She described this guy as maybe too religious and then thought of me. I’m not sure if I should have been offended by that or not lol. Even though her date was bad, I was single and thought why not give him a try. At the very least I’d have a good story and boy do I. Standards, Sarah, standards.

Nick and I decided to meet at a central location to both of us at a local bookstore. We met around 7 and would decide what to do from there. From the minute Nick and I met, he wanted to know what our mutual friends had said about him (as in my friend that went out with him.) I’m typically a pretty patient person when it comes to that, but I finally had to tell him to stop caring about what other people think about him. It was so annoying to say the least. But it gets better. He asked what we should do. Sidenote- I like a guy that plans and comes up with ideas so I might have already started thinking less of him and judging at this point. My bad. I suggested we go eat because it’s dinnertime and I’m starving. Nope, he just ate. Wow, thanks. I suggest the mall, which was right across the street. Nope, too many people. Alright. I suggest the beach and pier, which was about 10 minutes away. Nope, too far. At this point I was already giving up. He suggested the park that was right across the street. I said fine but I was going to drive through Steak n’ Shake first because I was starving and meet him there. I did- with a burger, fries, and milkshake in hand. We talked. I ate. It was okay. Mostly dull. Mostly about him. It was fascinating. I didn’t know there were people out there who were really this self-absorbed. We got kicked out of the park because they were closing and went across the street to another park and continued to walk and talk. We did have some good conversation and he is a nice guy, there was just nothing there. I didn’t think we’d go out again but we did. You could say I’m a glutton for punishment.

Date two:
So you’re probably wondering why in the world I would go out with Nick again. Yea, I still don’t know either. We would text on and off after our first date and we had made a silly bet over politics and he won. Loser was supposed to take the other to dinner. We agreed on a place to go which was his idea- central location yet again. While walking up to the restaurant, he asked me if the place was good. I told him that I didn’t know because I had never been there. He then proceeded to ask me why I picked the place and I told him that I didn’t. He said I did. We argued in the parking lot about this. Real mature, I know. Turns out I was right and he misread my text. He still owes me a movie for being wrong. Since we were at an outdoor mall with several restaurants around, we decided to walk somewhere else. On our walk, he told me not to worry, that he would pay for his half of the check. Uhh thanks? Maybe I’m a little old fashioned but seriously. Am I wrong for thinking he should have still paid? Maybe I’m spoiled. I don’t know. I wish I could say it got better.

We went to a pizza place and both got water. He asked if I wanted to share a pizza and I said sure. He wanted to know what I wanted on it and I told him I didn’t care- whatever he wanted was fine. I just wanted garlic knots. We ate and we fought. Maybe it was my fault because I love talking about taboo topics such as religion, politics, and sex. He zoned out once during dinner and told me how he felt bad for fat people. That was weird. One time he told me not to interrupt him and let him finish talking. Wow. And just so we are clear, I am a pretty passionate person, but always respectful so that definitely blind-sided me.

Dinner was great- as in the food. We had to get a to go box for the rest of the pizza; I actually only ate one slice because I filled up on garlic knots. I took two additional slices to go and Nick took a total of five. I’m mentioning this for a reason. When the check came, Nick looked at it for awhile and then asked how we should split it. Mind you, there are only two items on it- our pizza and the garlic knots (which he ate too). I knew what he was thinking- he didn’t want to pay for the garlic knots since I ordered them. His face said it all. I said we could split it down the middle. He paused for a second and then agreed. Such a charmer.

We ended up walking around to different shops- he needed a beanie. This guy is so vain. He is good looking but oh my gosh, he thinks he is the best thing since slice bread. We go into Old Navy and see a family taking photos with the mannequins and I could tell he wanted one but was kind of shy. I offered to take it for him. Most people would take a picture with each other; my date wanted one with a mannequin. He then tried on several beanies and asked me how each one looked. They all look the same! Ahh. He finally decides and we continue to walk. I did want to stop into Claire’s for a second to see if they had any phone cases, don’t judge me. We were in the store for no more than a minute when I noticed Nick wasn’t in the store anymore. I go to look for him and he is outside wandering. I asked him what he was doing and he thought I said I was ready to go. Wow. Okay then.

We end up walking back to our trucks and I hug him, say thanks, and tell him I had a good time. As I start walking back to my truck he made a big mistake; he asks me if I meant that. Did I really have a good time? He shouldn’t have asked that. I had to be honest. We end up talking for over an hour in the parking lot. It was actually the best part of all of our interactions. We got to talk about some pretty deep stuff. Long story short, I just didn’t think he was ready to date yet. Obviously I care about him and this was all in good fun. I never have met someone I didn’t care about. And not everyone we go out with is going to be the person we marry. That’s okay. To quote Madea- some people come into your life for a lifetime, others for a season. For whatever reason, Nick and I met.

Third times a charm:
Nick contacted me not too long ago and we decided we should catch up. We met at a restaurant and he actually paid for my food and drink with no hesitation. Maybe my talk with him actually did work;-) But he’s moved on- to cougars and pretty women. I love catching up with him and I’d like to think we’ll always be friends. Maybe not after he reads this post though. Oops!

7 thoughts on “My best worst date ever”