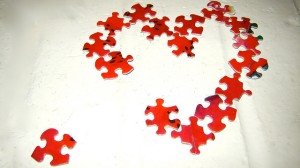 I still remember laying in bed trying to fall asleep and my friend texting me, telling me I needed to download an app stat. Like right then. “It’s called Tinder and it is soooo funny.” Being a lover of most things funny, I downloaded it with little hesitation. In the process of learning about the app, I became completely adamant about not doing a dating site. She assured me that it wasn’t and was just an app where you swipe through different people. Okay, in her defense, it was hilarious. It is somewhat empowering, perhaps a tad controlling, to pick and choose what people you potentially wanted to talk to. Mind you, for those of you that do not know, you choose who you want to talk to based on four pictures and a short bio. Not. shallow. at. all.

Anyone that appeared not crazy I would swipe right to. I think it’s right. Right meant you’d be interested in them; it’s a match and you both are notified when both swiped right. I honestly swiped right on people I didn’t care for just because I was curious if they’d swipe right too. Real mature, I know. Looking back, I definitely shouldn’t have done that. I was left with matches of people I didn’t care to talk to; and it was worse when they would initiate conversation and I just wouldn’t respond. I question my judgement sometimes. I did have one rule- I would not initiate any conversation first. I know this may seem silly but it was a way to weed out some people and I have always appreciated it when guys pursue. I believe in girls letting guys know they are interested but I think we should encourage men to take on leadership roles more.

Okay, enough of the build up, let’s get to the good part. Matt. Or should I say Matt and Lisa. The conversations I had prior to talking to Matt on Tinder aren’t even worth talking about. They were “hey” and “what’s up?” nothing much more. Shallow is the word I would use to describe them. Matt was different. Matt’s very first message to me stood out from the rest. It was honest, real, and made me feel valued and appreciated; he talked about specific things he liked in my bio and was extremely respectful. Matt was the only person I talked to consistently and we would talk almost everyday; every night around 8, except for the weekends because we were both very busy. We would talk about everything from work and our past weekends to goals, values, and dreams. I felt like I was in a relationship, though only emotionally. It was safe because he was at a distance; he couldn’t hurt me… Or so I thought.

We both said we liked taking things slow and I appreciated that. There were a few bumps in the road through the course of us talking that seemed weird, now that I look back on them, that I easily excused. Maybe because I am too trusting, maybe because I didn’t want to see the truth. We became unmatched on Tinder and his entire profile was gone from me. I remember going through a whole emotional roller coaster in one day over someone I hadn’t even met in person. How dumb. It’s hard when you let someone in and become vulnerable. You give them authority and power to hurt you. Matt ended up finding me on Facebook the next day, which in itself seemed to be a miracle, since he had little knowledge on who I was and didn’t even know my last name. He sent me a message through Facebook and told me he did an update on his phone and that the Tinder app happened to get deleted. He explained how upset he was and hoped I didn’t find him contacting me on Facebook as creepy. I actually liked it. It is fun to feel pursued. We became Facebook friends and ended up moving on. We also exchanged numbers and would text throughout the week. One day I noticed that we weren’t Facebook friends anymore and the same emotional feelings of when I lost Matt on Tinder arose again. Matt ended up asking me why I deleted him on Facebook. Are you serious? He was the one that deleted me! After working through that- as in agreeing that we didn’t know what happened and getting no real answer, we both continued forward. Our whole “relationship” lasted about a month. It was when I noticed Lisa that things were turned upside down.

Matt doesn’t post much on Facebook. Like seriously, there seemed to be no difference in what I could see with being his friend on there as opposed to not. Some people are private and I respect that. However, it was when I noticed that a girl named Lisa referenced him as “babe” in a comment that I really questioned things. I clicked on her page to see who she was (seriously, I should have really pursued becoming a detective or joining the FBI with these skills, right?) and that is when I saw everything I needed; pictures of Matt and Lisa all over her profile. The weddings he told me about, the theme parks he mentioned- they were all with her. And I never even thought to ask. Never crossed my mind. I hate being involved with situations like this. Guys- in case you are wondering why girls get suspicious or feel the need to snoop through guys’ phones this is why! People like Matt. Instead of allowing Matt to hurt me or have a negative effect on me in future dealings with guys, I did the best I could to learn from it and be more cautious of who I talk to.

Matt and I were in the middle of a deep conversation via text (that is what I liked most about him) when I just came out and wrote- “How long has it been since your last relationship?” That is when he started to tell me everything. About how he had been trying to get out of a relationship for the past 4 months. And how I needed to hear him out. About how it looked a lot worse than it is. It was all too much to handle at that time. I was leaving to see my dad for the weekend the next day and because I do give people the benefit of the doubt, I agreed to talk to him on my way back, a few days later via phone. This would be the one and only time I would talk to him over the phone.

In the middle of my trip, I noticed that Lisa started following me on Instagram. That is when I realized I was in the middle of something I never thought I would be in. Matt and I talked for a couple hours on my way home. I told him about how I was feeling and how I didn’t really trust him anymore. Matt had an answer for everything. It was hard not to believe him. He explained how he met her over the past weekend and ended things again. My mind at this point was how in the world do you try to break up with someone for 4 months- and how is it different this time?! He went on to say how he had blocked her from everything and even sent me screenshots of previous texts that showed how he had tried to end it but she always wanted another chance. He gave me so much evidence and proof- it was hard not to believe that she was genuinely crazy. I told him that we would see how things go and I just observed and watched for the following days. I prayed a lot.

There was a lot of truth in what Matt told me as I would soon be contacted by his now ex-girlfriend within a couple of days. I received one of the meanest letters I have ever gotten via Facebook explaining what a horrible person I was from Lisa. It was clear she was hurt. And my heart broke. So many people told me not to write her back but I couldn’t help but to think about what I would have wanted if I had been in her shoes. She felt so lost. So hurt. So betrayed. So broken. Throughout everything, I learned she had been the one that deleted his Tinder app. She deleted me off of his Facebook. She had known about me from the beginning and here she was losing the love of her life because of me in her eyes. I honestly didn’t know who to believe or who was crazy between Matt and Lisa, maybe they both were.

I ended up telling Matt that this was too much for me. And I didn’t trust him anymore anyway. I sent some messages back and forth with Lisa, and as I started to piece things together with her she started to hate me less and less. She didn’t want to believe me and I understand that. She was shocked by the things he said about her and what he did. I started to question why God had allowed this situation to happen, one where there would be so much hurt and betrayal. I began to look at it as though maybe I could help Lisa in some way. I wanted to empower her, I wanted to give her strength. Instead of labeling her as crazy because of her actions, I began to see her actions as results of someone who had been abused, verbally and emotionally. Matt led her to believe he cared about, even while he was breaking up with her. That is why when I told him I could’t continue to talk to him anymore, he went right back to her. Her last words to me were “I wish I was as strong as you.” I still pray for them, for both of them. It’s easy to look and wonder how someone could go back to someone like that, after she has seen all he has done. But she loved him. And she was so scared. It’s frightening to leave what you have in hopes for something more. But sometimes you have to leave in order to obtain something better. I pray she has the strength to do that someday.

*names have been changed.

One thought on “Tender Tinder Pt. 1: Matt… And Lisa”